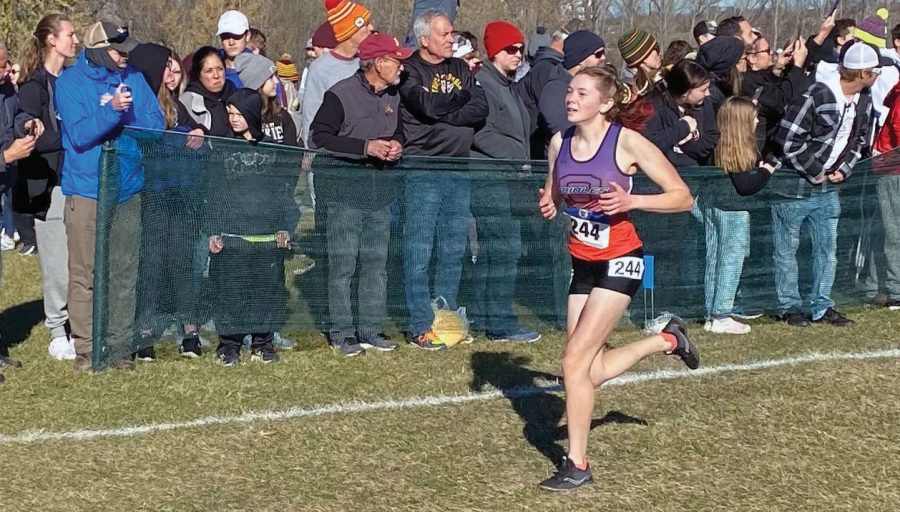 Freshman Nora Lindeman runs at the state meet on Nov. 6. Lindeman finished in 104th place at the MSHL state meet.

After freshman Nora Lindeman spared no effort in sections, she said she pushed herself to her limit to qualify for state.

“It was really hard. I gave it my all. I was racing one girl down in the last half-mile, and if I had let up at all, I wouldn’t have passed her,”  Nora Lindeman said. “I thought that I was the last spot, and that if I wanted to go to state, I had to stay in front of her.”

Linderman, along with sophomore Jersey Miller, achieved a spot in state after the section championship Oct. 27. Park girls placed third and boys placed sixth in the 5,000 meter race at the section 6AAA varsity championships. According to assistant coach Alyssa Nash, the runners’ leadership is what made the victory at sections possible.

“We have some great leadership on the team, and in order to perform well, you have to have good leadership that brings positive energy to practice everyday,” Nash said. “We’re really proud of both the boys and the girls for how they performed.”

Junior Denly Lindeman said his dedication to the sport, especially during the off-season, allowed him to perform to his full potential at sections.

“I went on runs every single day in the summer,” Denly Lindeman said. “My training paid off. I performed to the best of my ability. It was my second-best time, and it would’ve been really difficult to beat my first time, because it was on an easier course.”

Nora Lindeman said her coaches are extremely helpful, and she’s looking forward to spending more time with them as she prepares for state.

“Our coaches are really amazing. They give us workouts, but they also give us easy days,” Nora Lindeman said. “We are still practicing. We have our after-season meet. We get to travel to South Dakota.”

According to Nash, the sense of belonging in the team was critical to the runners’ performance at sections.

“This is a team. You’re not alone,” Nash said. “Knowing that your teammates are also doing this with you is something that can bring up your spirits if you’re struggling.”

Denly Lindeman said he is disappointed that the cross country season is over for him, but excited for other sports.

“The season is over for me since I didn’t make it to state, so there’s not much to look forward to,” Denly Lindeman said. “It’s bittersweet. I’m looking forward to swimming in the winter and track in the spring, but it’s sad that cross country is over.”