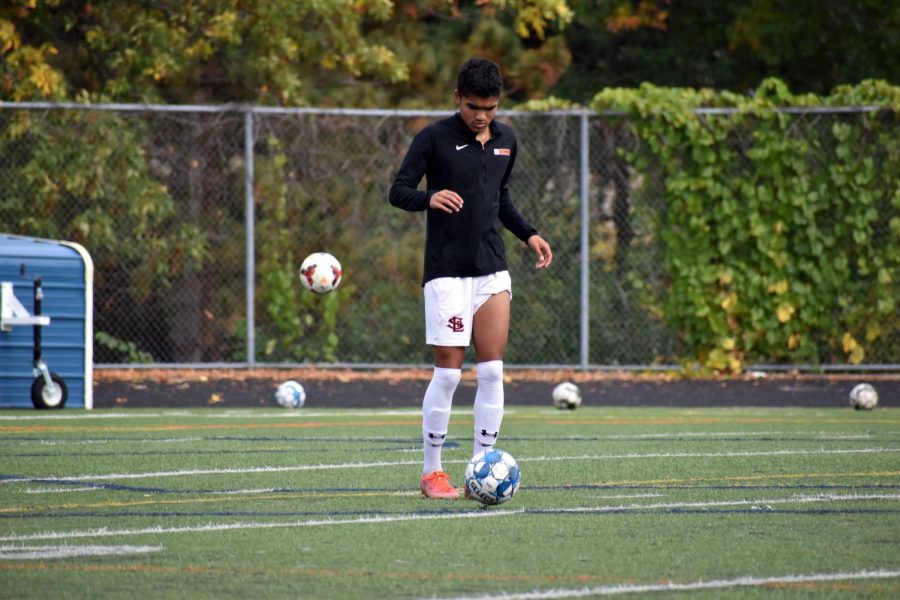 Senior Bennett Kouame warms up before a game Oct. 9. Kouame was one of three seniors to win the All-State award.

After finishing his final soccer season of his high school career, senior captain Nick Kent was delighted to find out he had been selected as part of the All-State soccer team.

“I was really excited and surprised,” Kent said. “My coach texted me and said I’d gotten it, and I was pretty shocked.”

Along with Kent, senior Alma Beaton and Bennett Kouame received All-State awards for their performances on the field. Each of them were nominated by a coach, and then chosen out of other candidates by a selection committee.

For Beaton, who captains the girls’ team, receiving the award was a special moment of recognition.

Winning the award was not an easy feat, but Kouame said he believes his hard work in the offseason gave him an advantage in the regular season.

“In the summer I got to play on a semi-pro team, which meant I got to play with a lot of D1 and ex-pro players. That’s really how I was able to mature my game,” Kouame said.

According to Beaton, not only was offseason training critical, but taking risks to help the team overall was beneficial.

“I had to start attacking more, because I’ve never been much of a goal scorer. But on this team this year, I had to step into that role,” Beaton said.

According to Kent, the award recognizes players who not only standout in pressure moments, but also display leadership on the field.

“They look for big players to show up and play well, and also just players being leaders — that helps you get noticed. If you’re talking on the field and leading by example, that definitely helps,” Kent said.

Although the awards are individual, Kouame said his teammates helped the season be a success and he is proud of the expansion of the community.

“Just having a bunch of the younger guys, like (Elijah) Proost, Johnny (Ryan) and Luca (Guarin) on the team, they’re all freshmen and sophomores. It’s been fun to see them grow as players and get better,” Kouame said.