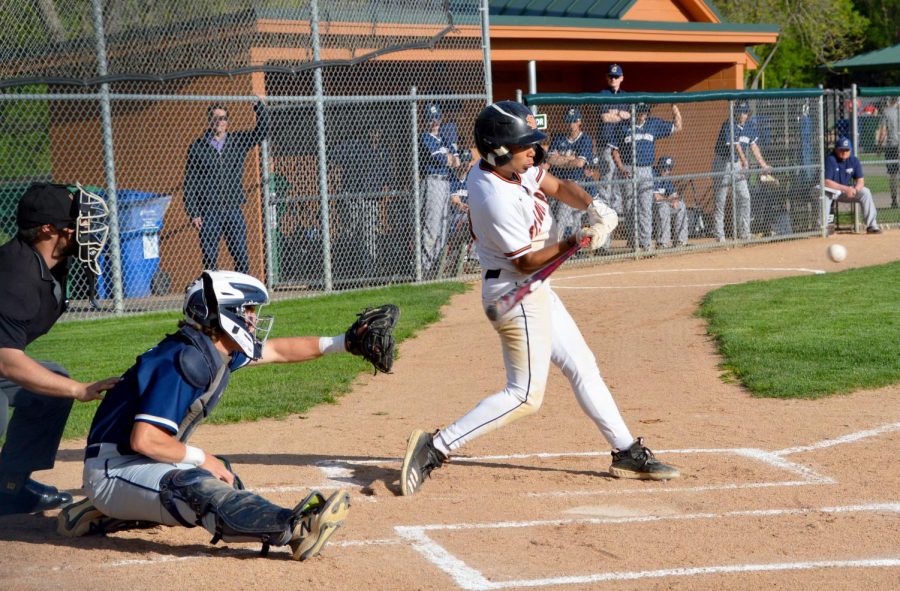 In his first at-bat, Senior Stanley Regguinti connects with a pitch against Chanhassen May 16. Regguinti helped Park extend its winning streak to 6 games.

Going into their second game against Chanhassen this year, the boys baseball team was riding a five game win streak. Junior captain Stefano Giovannelli said going into the game, the team knew they had to keep the momentum going.

“We just knew we couldn’t fall off, we knew we had to keep going, keep climbing,” Giovannelli said.

Park succeeded, winning the game 4-1 behind Giovanelli’s complete game in which he allowed two hits and striking out 13 Chanhassen batters. Coach Brian Kelly said it was one of the most impressive pitching performances he’s seen.

“We had one of the best pitching performances I’ve seen in my seven years as the head coach at Park with Stefano (Giovannelli),” Kelly said. “He made a really good Chanhassen team look unbalanced and unsettled all game long.”

On top of Giovannelli’s stellar performance on the mound, senior Henry Odens said everyone on the team played a part in the win.

“Energy was high in the dugout, we played really good as a team and everybody contributed,” Odens said.

Giovannelli said that the team has had a busy schedule, making practices more laid back in an attempt to not overwork themselves.

“We haven’t had practice because we had five games last week and only one practice but we’re just trying to keep it loose during practice, just practice for about an hour,” Giovannelli said.

Kelly was impressed by the team’s performance and highlighted the team’s resilience as they pushed forward for the win.

“The team played outstanding today, not too often SLP sweeps Chanhassen, we just made the plays,” said Kelly. “Got some tough hops but we came back and shut them down.”

The team will have a chance to extend their win streak 6 p.m. May 17 at Dakota Park against Waconia.