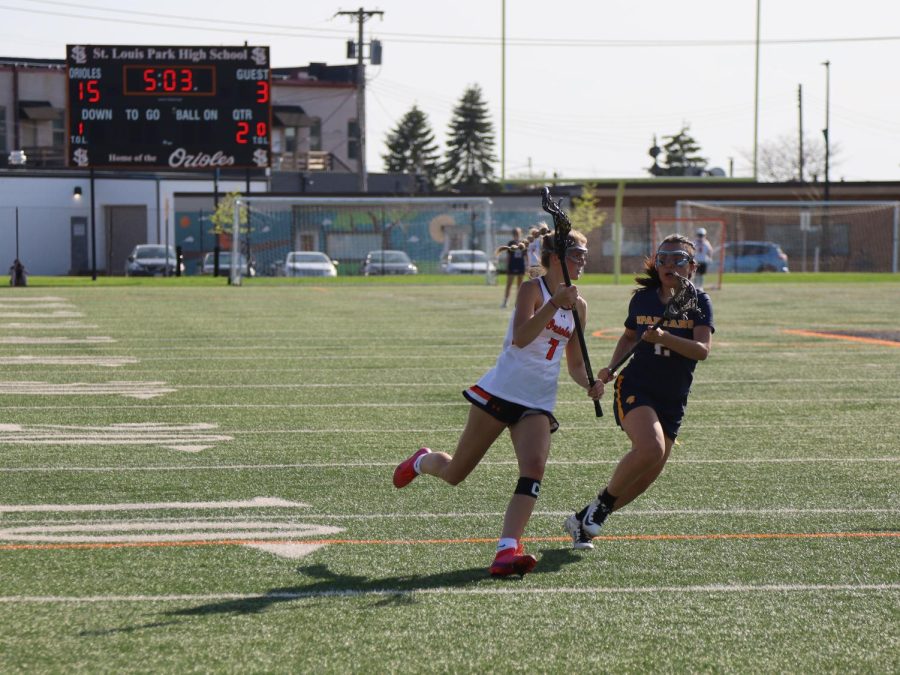 Senior Ryan Rasmussen drives toward the goal. Girls lacrosse won 18-3 in a blowout victory against St. Paul Academy May 12.

“It went really well. We played together as a team and we were able to connect passes and score on plays we haven’t been able to in the past,” Pearson said.

According to sophomore captain Margaux Pollock, the team stayed focused throughout the game.

“I was excited to be able to score today, and we all stayed composed against (St. Paul Academy),” Pollock said.

Despite the strong defensive effort St. Paul Academy had near the end of the match, Pearson said the team persevered for the win.

“At the end, they started to pressure us, which made us drop the ball a bit more, but we were able to pick it up and continue to play our game,” Pearson said.

Senior captain Emeila Johnson the team has gradually been improving as the season progresses.

“We had a good starting point, and we’ve been getting better since, so we’re at a good point right now,” Johnson said.

Pearson said the large amount of underclassmen on the team has allowed it to develop players and plan ahead for future seasons.

“It’s awesome,” Pearson said. “We’re able to form them into a team that we know going into the future and do really well. They have a lot of talent.”

Girls’ lacrosse’s next match is against Waconia 6 p.m. May 19 at home.