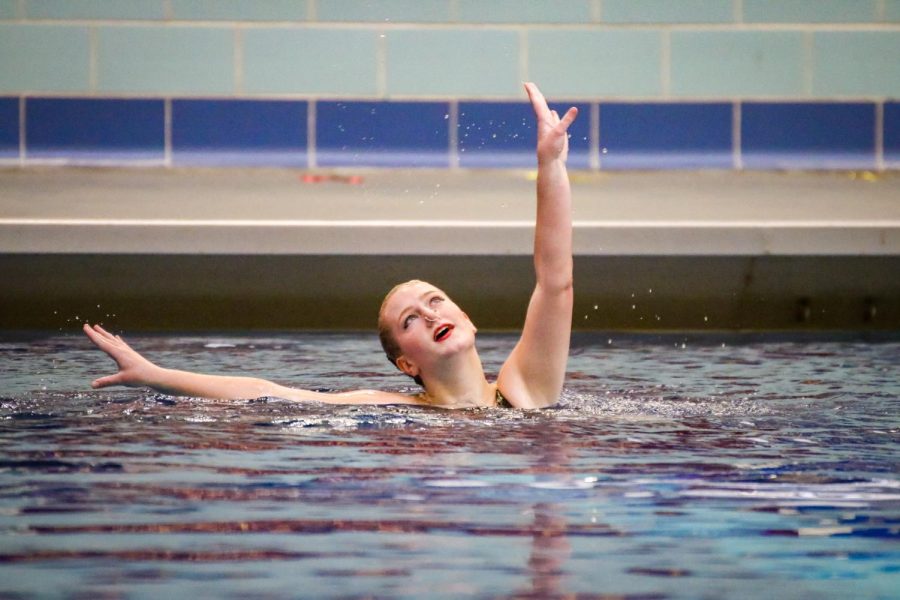 Senior Ada Turman glides out of the water during her solo May 27. Park's synchro team competed at the State meet held at the University of Minnesota Aquatic Center.

Just two days before its final competition of the season, Park synchro was hit with devastating news — three swimmers had tested positive for COVID-19. Although an unexpected ending to their season, head coach Carol Guddal said she was proud of the team’s results despite the situation.

“It was not how any of us wanted or expected the meet to go. That being said, (for) the swimmers that were there, I’m so proud of their resilience and how they just did the hard thing anyways,” Guddal said. “We tied with Blake for sixth place overall, and considering we only had four swimmers that ended up scoring points, that’s a phenomenal finish.”

With such short notice, freshman Charlotte Cox said finalizing and changing routines was a major obstacle.

“It definitely gave us some setbacks and we had to shuffle around a bunch of our routine. It’s really weird to swim with not all of your teammates because it’s very much a team oriented sport. (The coaches) just said go out there and do your best because that’s all you can do,” Cox said.

For Guddal, she said the coaches tried to remain positive in light of the difficulties

“There were some big feelings — obviously justified. I did think we’d have to deal with COVID-(19) but not in this capacity. Just reminding (the swimmers) that this does not negate all of the hard work you’ve done this season and that the swimmers who weren’t present would still want you to do your very best,” Guddal said. “We always say ‘whatever your best looks like for today’, so I definitely think that the swimmers all gave their best that they could provide.”

Despite the challenge thrown at them, senior Ada Turman said that the team used it as motivation, leading to high placements overall.

“This State meet was the last time that we were ever going to swim these routines together. Swimming it for our teammates that couldn’t be there, presenting, smiling at the judges and being present in the moment were some things that Coach Carol mentioned to our team before we got out there,” Turman said. “Just making the most of it even though it was an unfortunate circumstance.”

Reflecting on the season as a whole, Cox said she believes it was a success.

“The best part was getting to work with everybody and have a new coaching staff and new teammates and just the overall environment,” Cox said.

Ending her first season as head coach, Guddall said she is thankful for the opportunities and is looking forward to future seasons.

“I’m a proud coach, it’s very exciting and it’s definitely a different capacity. I was just so grateful with the response from other coaches in the league. There’s only 14 high schools that have synchronized swimming and everyone was so generous and affirming. For myself as a coach, that just makes it that much easier just to help empower my swimmers to do their very best work,” Guddal said.