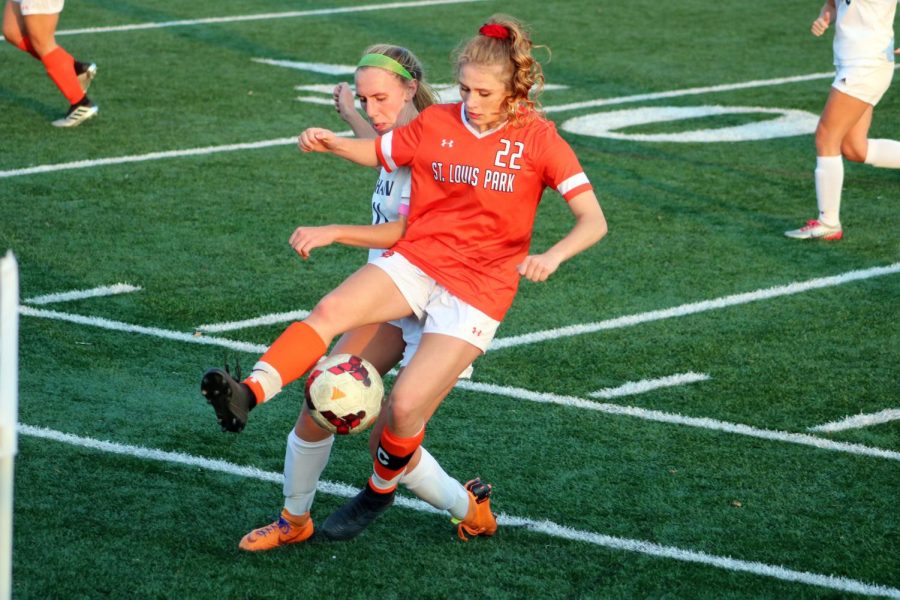 Senior Alanna Franklin blocks a Chanhassen player from the ball during the Oct. 8 match. Park lost with a final score of 1-0.

Heading into the final conference game, senior Sadie Yarosh said the team was in high spirits.

“Last time we only lost 1-0, so coming into this game I was confident we could succeed,” Yarosh said. “We’ve been playing well the past few games, so [we] had a positive mindset.”

According to junior Olivia Brown, the team knew the competition was going to be tough coming into the game. To raise its spirits, the team listened to their pregame playlist and tried to spread good energy to all players on the team.

“We listen to music, as we have a playlist and we just try to spread positive energy with each other,” Brown said. “[We try to] hype each other up to get each other ready for the game.”

Head Coach Benji Kent said he thought the team’s lack of offense played a big part in their loss.

“We’re still trying to find some technical things in our shooting,” Kent said. “Our first touch was pretty good, but I feel like we sometimes played too far off of them defensively. We need to be more aggressive.”

Yarosh said the team could have worked on passing as well as keeping it out of their side of the field.

“We could have done a better job laying off the ball and connecting our passes,” Yarosh said. “We also could have served it in more and got some crosses.”

Brown said she believed the defense could have done a better job during the match. Brown also said that although the team did a good job passing, the passing could have been better.

“Defensively, we probably could’ve been stronger.” Brown said. “[In terms of] connecting passes, we did pretty well, but there were a couple times that we just kicked the ball around.”

Kent also talked about Senior Night and he was sad to see the seniors play for the last time in the regular season.

“It’s a really great group of kids… some of them have been playing since they were 8th or 9th graders. It’s really hard to see because they are a super great group of kids,” Kent said. “Hard workers, good students and friends, great soccer players, it’s going to be sad to see them go.”

Park is set to play sections Oct. 14, but the team and time have not been decided yet.