Team looking forward to improving over the rest of the season 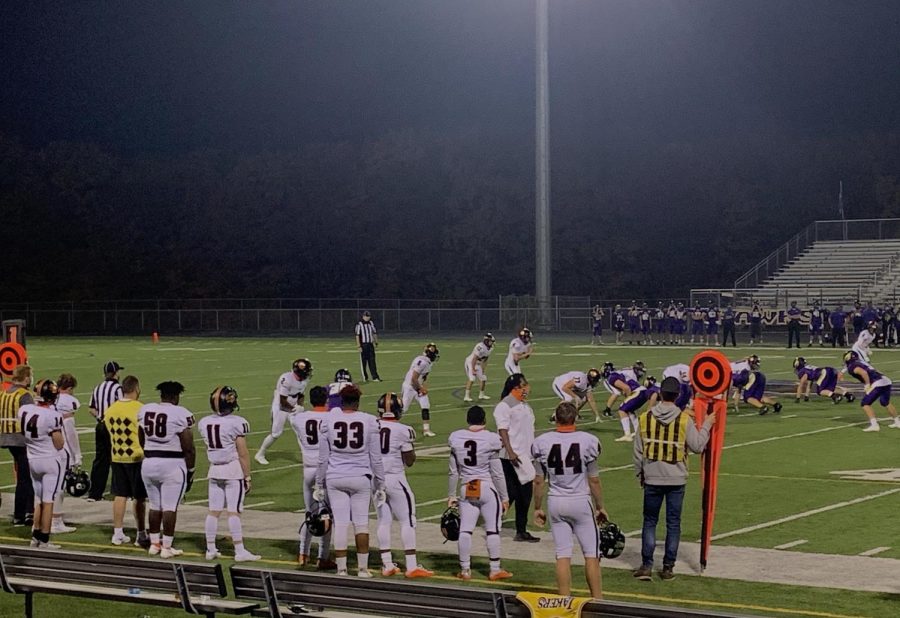 St. Louis Park football athletes play off in the first quarter Oct. 9. Park lost 7-44 Against Chaska in their first game of the season.

Although the 44-7 loss was not what he was hoping for, athletic director Andy Ewald said the players have been putting lots of effort at practice, but they are still adjusting to playing with the new COVID-19 rules and requirements.

“They’re only two weeks into everything. I know our coaches have worked extremely hard, and the kids have worked really hard,” Ewald said. “It’s a hard first game playing the defending state champion on the road, and there’s not much of an environment because of the 250 people capacity.”

Senior McCabe Dvorak said the lack of fans did not affect the team too much, but there were a lot of changes on the field to keep players safe.

“It didn’t feel much different, mostly because we don’t have many fans at away games anyways. But, we did have to spread out on the sidelines, and we only had bottled water so nobody was sharing,” Dvorak said.

According to junior Cahari Mayfield, the team’s intensity level seemed lower than usual due to the lack of practice they have had since the late start to their season.

“(The team didn’t) seem like they played as hard as they usually do. It’s because of the pandemic and what’s going on. They haven’t had as much practice as they need,” Mayfield said.

Since The Minnesota State High School (MSHSL) moved football and volleyball back to the fall, coaches have been taking steps to keep everyone safe at practices, but players also need to continue to practice social distancing outside of their sport, according to Ewald.

“My opinion on that doesn’t really matter, because the high school league reversed their decision that they made. And it’s our responsibility to provide the opportunity, and to try to do everything we can to make it the safest that we can,” Ewald said. “One, we can do everything programmatically to make it be as safe as it possibly can. But besides your football bubble, what are you doing with your personal bubble to keep things safe? We all have to do our part.”

Mayfield said it is more fair now that all fall sports are on and hopes athletes can take advantage of this season to work towards their goals.

“As long as all the sports are going to play, not just select sports, I feel like everybody will be okay with it. It might benefit (athletes) because if people play sports, I’m guessing they are serious about this stuff, and it could help them go and do what they want to do in the future,” Mayfield said.

Even with a shortened season, Dvorak said he is grateful they have a season at all, and he is excited to see where the team will go.

“I’m looking forward to playing only five more games, and I’m very happy we got the opportunity to play this fall. We have a lot to work on, but this team has a lot of potential to be great,” Dvorak said.

Ewald said now that football has started, he is hoping to see the team continue to improve and is excited to watch both football and volleyball’s upcoming games.

“I’m looking forward to seeing all our teams compete. It’s been great being able to see cross country, swimming, girls’ tennis, both our soccer teams. It’s fun being out here watching them compete tonight. It’ll be great next Thursday when we have home volleyball,” Ewald said.

Boys’ football’s next game will be at 7 p.m. Oct. 16 at St. Louis Park High School Stadium against Waconia.