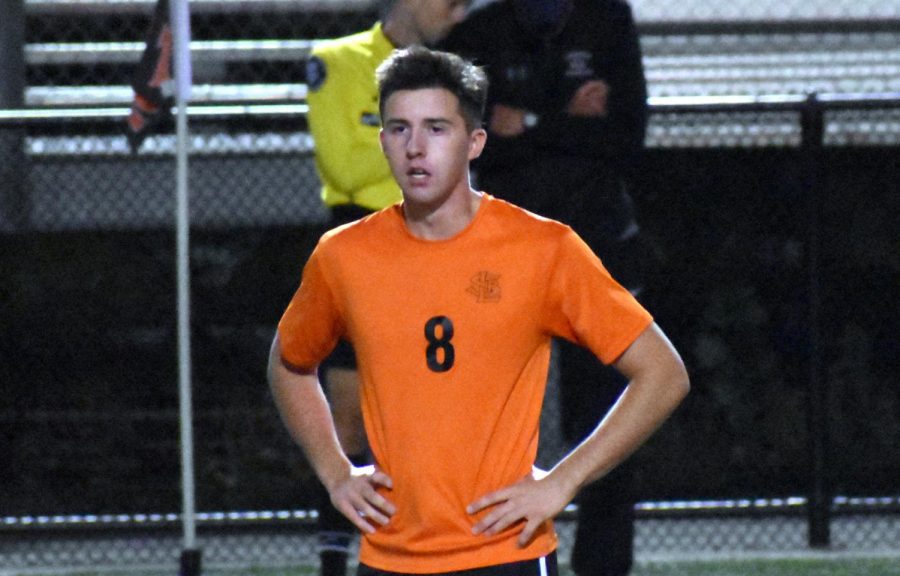 Junior Danny Lainsbury looks out for the ball Sept. 29. Park lost to Chaska with a final score of 2-1.

I put a lot of time and effort into soccer, and seeing that pay off is pretty satisfying. Also, I spend a lot of free time doing it and (I) make great friends playing it. Overall, it’s a pretty fun thing to be doing.

How long have you been playing soccer?

Basically as long as I can remember. I’ve probably been playing since I was 5 or 6.

Why did you decide to start playing soccer?

I don’t have a specific memory, but I’ve done other sports like I played baseball, I was a swimmer and played soccer — just trying out different sports to see what I liked the best, and it turned out to be soccer.

What position do you play? Have you played any other position?

I play forward, center-forward, and I’ve pretty much played that as long as I can remember.

How has your season been going so far?

We’re 5-2-1 this year, which is not as good as last year — last year we were 10-2 at the end of the season I think — but there are (fewer) games this season. Honestly, we’re doing pretty well. We’ve got a pretty young team.

What has been the hardest part of this season?

I would say probably playing consistently. We’re a young team, so players have less experience.

Who is your role model in soccer and why?

I guess I have favorite players and players I’ve looked up to over the years. If I had to pick just one player, that would probably be Cristiano Ronaldo. He is one of the most famous players of all time. Probably the one I watched the most growing up.

What is an element of your game that you plan to improve on going forward?

Finishing my chances. Sometimes I miss clear goal-scoring opportunities, and for my position, that is not acceptable.

What are you hoping to achieve this season?

I hope we can win every game we have left and win the sectional championship.