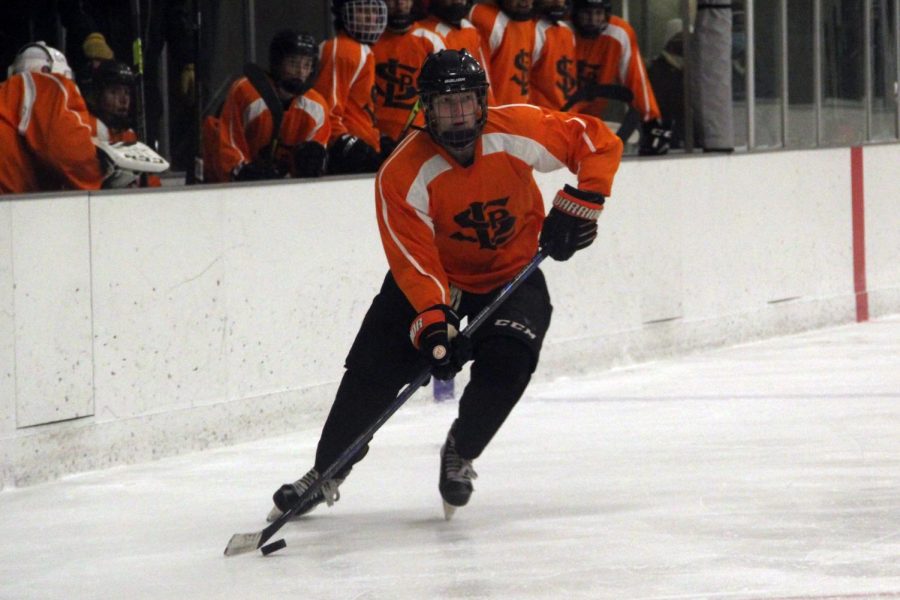 Senior Davis Bye carries the puck up the ice during the boys’ varsity hockey game against Osseo Nov. 12. Bye plays as a defenseman and has played hockey since the age of four.

How long have you been playing hockey?

I started when I was around 3 or 4 years old, so I’ve been playing most of my life.

What is your favorite memory?

It was seven or eight years ago, there was a tournament over in Wisconsin. We lost every game during the tournament and got shut out every game except for one where I ended up scoring the goal. It made me feel proud and excited just getting the chance to turn our feelings about the tournament around.

I like the pace, the adrenaline and the support of the team. All that combined makes it really enjoyable for me.

What goals do you have for this season?

My main goal right now is to hopefully get a spot on varsity. I am a defenseman and right now there is a lot of competition there for a varsity spot, so I’m hoping to get there this year.

What do you like about the position you play?

I play defense, not really specific on left or right. I like it a lot because it’s less skating than forward. I have played forward a few times over my years of hockey. Defense has always been my favorite position, it aligns more with my skill set.

What’s the hardest part of the hockey season?

Physically, the tryouts are the hardest. You have to give it your all to get where you want to be. Mentally, it’s the end of the season. Especially during the last game, you don’t want to lose the game of the season, so it can be really nerve-racking.

What do you want to improve on this season?

The main things I want to improve on are my decision making and my shot as well.