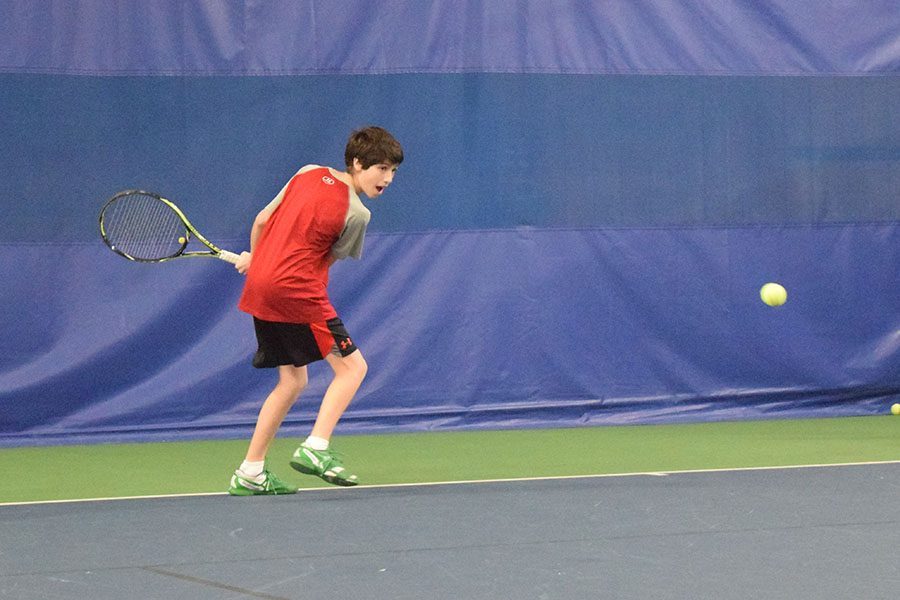 Sophomore Rafe Covin coils to swing a backhand at captains’ practice during the 2017 season. According to head coach David Breitenbucher, tryouts will be 3:30-5:00 p.m. April 2-4 at the St. Louis Park High School tennis courts.

The boys’ tennis team held a preseason meeting to finalize registration, captain practices and look at recruitment for the JV team, according to head coach David Breitenbucher.

Breitenbucher said he is looking forward to moving practices outside and getting a solid practice schedule in place.

“Hopefully when the weather breaks we’ll be able to practice on the (outdoor Park) courts, but for now I think (players) go over to Williston and Lifetime,” Breitenbucher said. “I put together a pretty tough schedule just because it makes us get better and better for conference.”

“Our short term goals right now are just building the team and getting everyone physically and mentally prepared for the strenuous match load and schedule we have this year,” Johnson said. “We have about a week of practice before matches start and then about three matches a week for the first several weeks.”

According to Junior Gerald Perlman, a personal goal of his is to create a strong team dynamic.

“For me, I want to at least make the first doubles seat. For the team, since we have a bunch of new guys coming up, bond as a team,” Perlman said.

Breitenbucher echoed the objective of eliminating any player shortfall and filling out the JV team.

“One of my goals right now is to make sure we have a JV team because our numbers were down,” Breitenbucher said. “There are a couple 8th graders we have been talking to who are going to try out. Ideally I would want 24, 25 guys.”

According to Breitenbucher, preseason practice will continue over spring break depending on the number of players available. Breitenbucher said he is optimistic for the season, with the goal of always getting better and playing better, and setting a routine schedule to do so.

“We have a lot of guys that are going to be out of town during spring break, but we’ll have the captains run some practices with people who are in town to hit,” Breitenbucher said. “The best thing I always say is to get better. We got a lot of guys coming back who played quite a bit last year, I think we are going to do well.”

Johnson said his goals for the future are an easy transition into practices and the early season leading to competitive section play.

“Long term I hope we continue to grow as a team and improve upon our record and are able to beat more competitive teams as we progress throughout the season in sections,” Johnson said. “We are going to start having captains practices once a week going forward, we’ve been doing some drills and games to get everyone hitting again so everyone is ready to hit the ground running when the season starts.

Perlman said he has begun practicing in hopes of improving his all-around confidence on the courts.

“A little bit on and off every other week I’ve been going to some indoor courts and hitting around with some guys,” Perlman said. “(I would like to better) my confidence level, because it’s been up and down. I want to stay confident with how I’m playing and everything else.”

According to Breitenbucher, tryouts will be 3:30-5 p.m. April 2-4 at the St. Louis Park High School tennis courts.