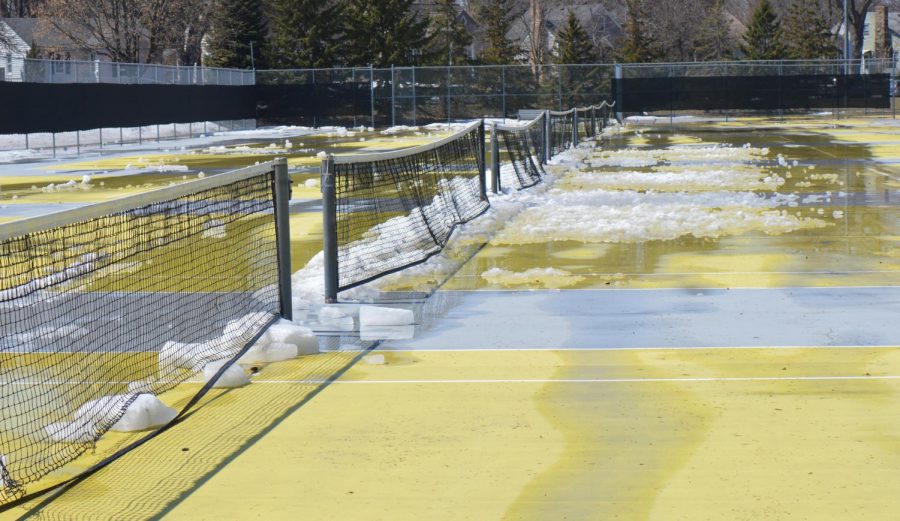 According to senior captain Adam Johnson, the tennis season has been delayed about two and a half weeks. Johnson said the delay will make for a packed schedule with an unusually large number of matches per week.

Senior captain Sam Birnberg said he believes the team will be prepared despite snow forcing indoor practices only until now.

“I definitely feel that we are prepared. The benefit of having scheduled matches pushed back is we’ve been able to practice in that time,” Birnberg said. “We had a chance to work and get better (than) we would have if we had a normal schedule, giving us a chance to get our skills and focus on what we want to improve on as a team and players.” 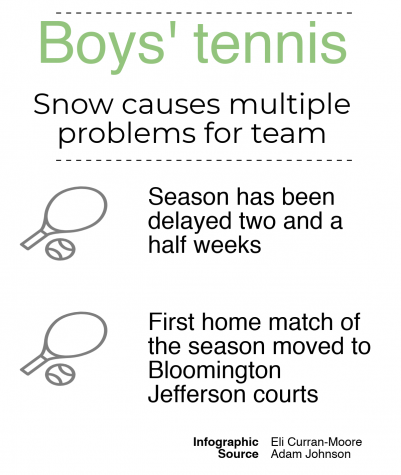 According to head coach David Breitenbucher, the snow delays are unprecedented in his 20 years of coaching tennis. Breitenbucher echoed the idea this will be a busy spring for the team.

“We’ve had years where it would snow but not in this amount and not this late. Starting next week were going to have 4-5 matches a week for the rest of the season, usually you have 2 maybe 3,” Breitenbucher said. “The guys are going to have to play a lot, we’re going to pack them all in a short time. The sun is out so hopefully we can get on our courts soon, hopefully it will all be melted.”

“I can’t say enough about the athletic department being willing and able to pay for indoor court time. I’ve talked to other coaches around the area, and they don’t have that luxury,” Breitenbucher said. “We have been inside every day for the last two or three weeks so it’s huge that we don’t have to cancel practice.”

Johnson said the team has been putting in work at practice which should translate into the team hitting the courts with confidence.

“We have been working on conditioning and going for some runs so I definitely think that we will be ready to hit the ground running when the snow melts, Johnson said.”

Breitenbucher said he is uncertain about his expectations for the team going into early matches due to the lack of beginning non-conference matches.

“Usually you play a bunch of non-conference matches before you get into conference,” Breitenbucher said. “From what I’ve seen in practice we’re going to be pretty good this year even through our numbers are down, so it should be fun.”

According to GoPark.org the first match of the season will now take place at 4:15 p.m. on April 23 at Bloomington Jefferson High School.