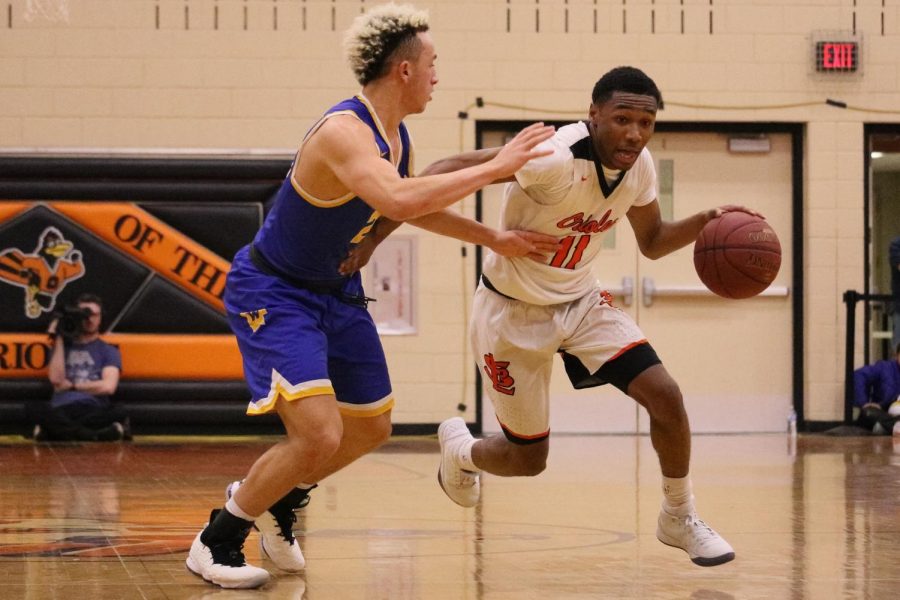 Senior Cire Mayfield drives to the basket against Wayzata defender Kody Williams. The Orioles were defeated by the Trojans 66-59 Mar. 9.

After starting the game slower than originally planned, junior Jacob Houts said the team couldn’t catch up with Wayzata’s offense.

“I think that in the second half we came out slow and they got a lead,” Houts said. “After that point we had to pressure them, which allowed them to get easy layups when we would have a half-second lapse on defense. They were then able to pull away from there, and we weren’t able to make up lost ground.”

The team lost to Wayzata 59-66 in its second Section game after defeating Minneapolis Washburn 85-70 in its first game. The team ended with a 13-13 overall record.

According to senior Aidan Doherty, the season went well overall despite the quicker-than-anticipated ending.

“Reflecting on the season, I think overall it was a great one. We all had a lot of fun I think,” Doherty said. “It didn’t exactly end the way we wanted it to, but it was a great experience and I am happy about my career.”

Junior Varsity coach Marquealis Edwards said the team helped create a positive atmosphere for his first year coaching, making the season enjoyable for both him and the team.

“The season went really well. I didn’t know a lot of the guys (at first), but once I got to know more of them it went a lot better,” Edwards said. “It was a lot of fun. The seniors worked really hard, and it was really just a good season.”

Houts said he wishes the team had the opportunity to advance to the Section finals and play Hopkins.

“We should have beat Wayzata, but I think it went pretty good,” Houts said. “The only thing is I am sad for the seniors that we had to go out like this. I wish we could have had one more game to play Hopkins.”

Looking forward to next year, Edwards said his bond with the current juniors will provide a good base for his relationship with the team moving forward into next year.

“I am looking forward to another coaching season. I am very comfortable with the juniors, the upcoming seniors. The seniors were awesome, but I came in as a new coach so I didn’t really know everybody,” Edwards said. “The juniors will be really fun, it will be a good season.”