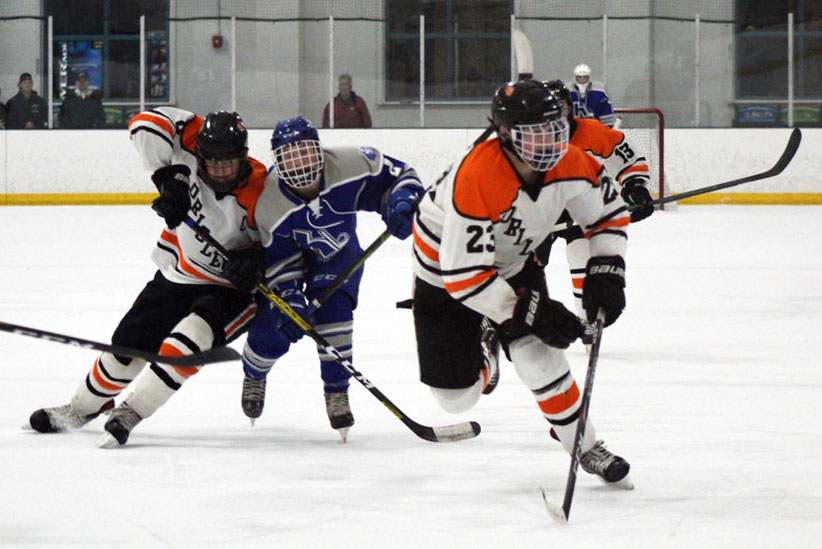 Following a 4-0 victory against Hopkins, senior Bobby Doss reflected on how these successes have affected him.

“Playing at St. Louis Park, you don’t really get the opportunity to win games and be relevant. We’re going to take our opportunity to see how far we can go with it,” Doss said. “It feels good to have our work pay off and we’re ready for Sections and Conference.”

According to the Star Tribune’s MN Boys’ Hockey Hub, Park has the best winning record, 10-6-0, in the Metro West Conference and is on a four-game winning streak.

Senior and captain William Pinney said he hopes the team will continue its winning streak by moving the puck and making plays, as he believes that has contributed to its success in its conference.

“We’re on a win streak right now, so I’m hoping we can continue that,” Pinney said. “We’re kind of known for not being super good in our conference, so it feels really good to be top in our conference right now.”

According to head coach Andrew Sackrison, a single player’s performance can shift the course of the game.

“Will Pinney showed up early on and made some big saves for us to give us the momentum we needed to finish,” Sackrison said. “Our team has all the confidence in the world that he’ll stop the puck. When you get big saves, those are momentum builders for us and then we pop a goal or two, then the momentum is in our favor.”

Although Doss was pleased with the team’s victory, he believes there are still things to be worked on.

“We’ve got to capitalize on a few more opportunities and keep the wings from the outside and break it out faster, but good game, good win,” Doss said.

Sackrison said a major focus in the team’s coming practices will be finishing plays, not just creating them.

“It always comes back to effort. I like their effort tonight. When all five guys are working, we create chances. I love the effort,” Sackrison said. “We have some work to do on finishing — we had a lot of chances to finish and put away pucks. That’s going to be a focus in practice.”

According to Sackrison, the team will have to continue to work hard in order to be successful in the upcoming Conference games.

“It’s a big Section win and we’ve got conference play starting up again next week. We’ve talked about a goal of finishing at least top 3. So, got to continue to play hard for that,” Sackrison said.

Park’s next game is against Chanhassen at 3 p.m. Jan.18 at Victoria Recreation Center.