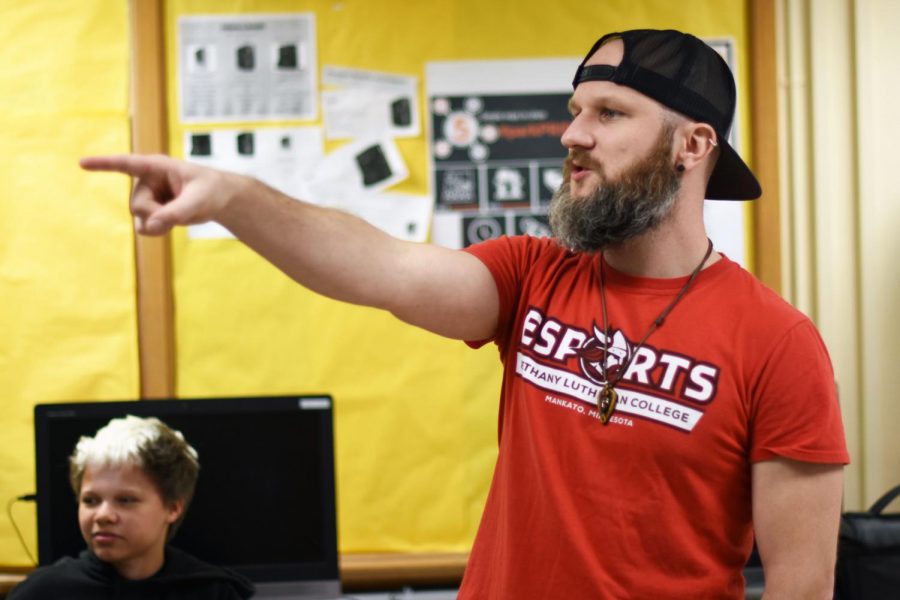 eSports coach Jake Utities points during the eSports meeting for the spring season March 5. Utities is a tournament organizer for Minnesota Varsity League's State championship, which moved online for League of Legends and Overwatch because of COVID-19.

With two substitutes filling in for absent players, senior Joseph Lindstrom said he was satisfied with the team’s play at the online-championship that resulted in a loss against Wayzata in the inaugural season of Minnesota Varsity League.

“It was just difficult because we had two people that were subbing in out of nowhere because we wanted to participate, but we also didn’t really have everyone who were starting on the team available. So we needed to accommodate with people who really haven’t played the game as much,” Lindstrom said. “But it ended up working out pretty well.”

Sophomore Will Bainbridge, who competed with Joseph on the Overwatch team, said he felt good about how the event went given the team’s circumstances.

“I can’t really complain. I feel like I played pretty well. I got a few flashy plays. But considering the fact we had to pick up subs that play League of Legends and only a bit of FPS [first person shooter] games, as our (offensive) players, I can’t really complain with how we performed,” Bainbridge said.

According to Jake Utities, who is a tournament organizer and Park’s eSports coach, COVID-19 led to the cancellation of the in-person tournament involving League of Legends and Overwatch at TCF Bank Stadium March 14-15, instead streaming the competition online.

“I still wanted to let the kids be able to participate and play and with eSports, that’s still an option — they can all play from home, which is really unique about our particular type of competition,” Utities said.

According to Utities, Park fell in the semifinals and lost a third place match for League of Legends, a game with strong competition in Minnesota.

“League of Legends did alright, made it past the first round but weren’t able to go further,” Utities said.

Other significant changes were made because of COVID-19 and other conflicts, according to Utities.

“It made us postpone Super Smash Brothers for about a month to see if we can play it in person because that game is just so much better to be played in person,” Utites said. “We also saw some kids not able to play and so St. Louis Park had a couple of substitutes come in for Overwatch.”

Bainbridge said Park will continue to prepare for the spring season online, no longer meeting in person with the cancellation of school because of COVID-19.

“We’re hoping we can place very high during the spring season that’s coming up here,” Bainbridge said. “We’re gonna try to get as many wins as possible and get high seats on the bracket and on the standings and hope we make it to playoffs and nationals.”