Athletes participate in both sports due to shared skills 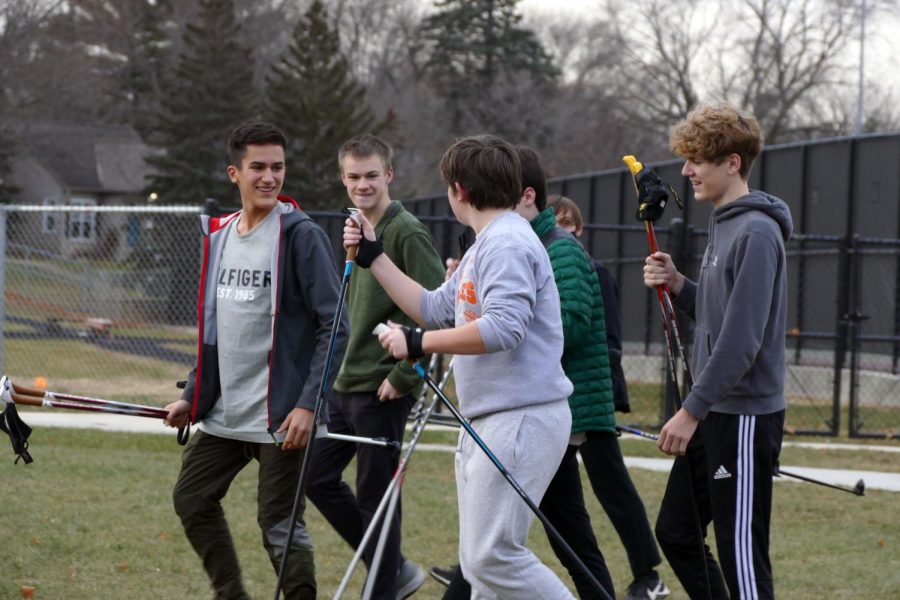 Sophomore Javi Shimming practices running with poles alongside the rest of the Nordic team Dec. 2. The overlap of participants in Nordic and Cross Country has assisted team members in staying in shape.

“It just really helped technique, endurance, stamina, and a lot with the mental aspect,” Katzovitz said. “You’re racing a 5k, but the only difference would be you’re either skiing it or running it.”

Katzovitz is part of the handful of athletes that participate in both cross country and Nordic skiing at Park. According to science teacher and Nordic coach Pat Hartman, the overlap between the two sports is due to their similar athletic nature and technique.

“It’s a pretty natural transition, they’re both endurance sports,” Hartman said. “(There’s) similar aerobic capacity needed for both of them, there’s a lot of really good crossover, so it’s pretty common that kids do both.”

For Katzovitz, who is on the girls’ varsity team for both sports, being on the cross country team allowed her to improve her technique and performance.

“I didn’t have the best endurance my first year on the team,” Katzovitz said. “But then, after I did cross country for even one season, my times in races went way down. I was able to breathe better during races.”

According to sophomore Tommy Walsh, participating in both cross country and Nordic skiing not only helps build his endurance and skill, but is also very convenient for those who want to maintain their skill and stay in shape in the offseason.

“It’s a really easy way to take either one of those sports (to) the next level of training,” Walsh said. “It’s not a lot of extra work you have to do in terms of scheduling and organizing to do offseason training because it’s two well organized and coached sports.”

Doing both sports can have many benefits, according to Hartman, as practicing the same skills in both cross country and Nordic skiing allows for student athletes to build on key training elements.

Katzovitz said having the overlap of athletes between the two sports is helpful from a social aspect, and also key to building a solid team community.

“A lot of us can complain about running cross country and then also can hang out in the fall and then again, we see each other in the winter so we’re just a lot stronger of a team,” Katzovitz said.

The benefit in this overlap is even greater for newer team members, according to Hartman, as they have a base group of people to build off of once the Nordic season begins.

“Some of (the younger students) come in and they know they already know like all the kids from the cross country season and that’s that’s really helpful,” Hartman said.

According to Walsh, having the shared family of Nordic and cross country athletes helps build on the pre-existing communities to form one larger circle.

“Everyone’s friends with everyone on the team,” Walsh said. “It’s like two big environments that are merging together.”