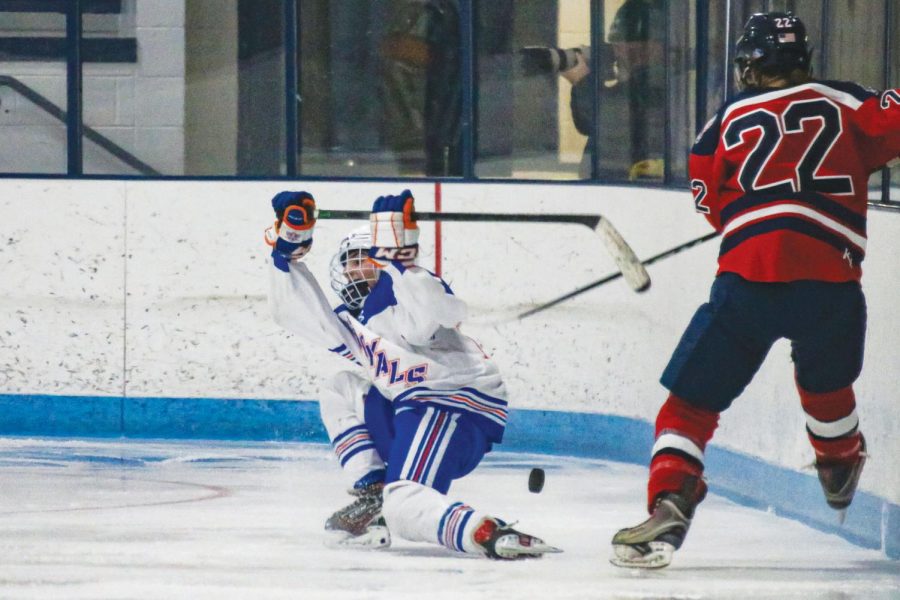 After a 2-0 loss against Armstrong, senior Emelia Johnson said the team was lacking consistency, leading to the team’s defeat.

“We started (off) the game really strong, I just feel as if we need to play the full 51 minutes,” Johnson said. “The second period was definitely our downfall, knowing that the other team took that as our downfall is a little frustrating.”

Assistant coach Annie McNeill said more shots on goal would have helped in the game, and not over complicate plays as well as not overthinking the offense.

“We have got to keep the play simple and just shoot the puck, we got caught over handling the puck and unfortunately turning it over quite a bit,” McNeill said. “Our goal is always to put together a solid 51 minutes of hockey and that wasn’t the case in the 2nd period.”

“Having a combined team with Hopkins makes it super fun because you get to meet girls that go to another school and eventually become best friends with them,” Betzer said.

McNeill said that the girls played hard against Armstrong, but thinks that they weren’t as focused as they could’ve been.

“We lost our focus as a team and it took an entire period for us to regroup again,” McNeill said.

Betzer said the team has high spirits and is excited to get back on the ice for the next games.

“It’s always fun to have a home game and I felt like the energy in the locker room and bench was really good,” Betzer said. “I have a broken wrist right now, so before the season ends, hopefully I will be back out on the ice and be able to play my last couple games with my team.”

According to Johnson, the team needs to work on putting their effort into the whole time for future games.

“There’s always stuff to improve on but I feel like the main thing we need to focus on is just playing the whole game,” Johnson said.

Although they’ve faced many losses, McNeill found a way to motivate the players, and help them keep a positive mindset.

“I like to remind our team of their individual ‘why’. I ask them, ‘why do you play hockey?’ There are many responses, but the common thread is that it’s fun. It’s important to remember that because without fun, playing a game actually seems pretty pointless,” McNeill said, “I’m known for busting out a silly dance move or corny joke to get the team smiling again too.”