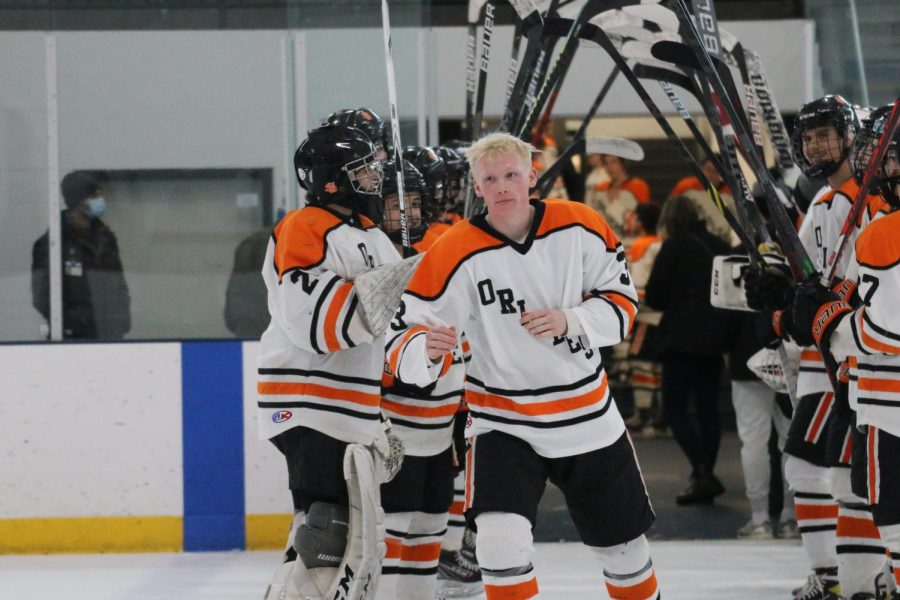 Despite the honoring of the seven seniors on the roster, Park’s senior “night” took off on the wrong foot, leading to its downfall against Chaska.

According to head coach Matt Penner, the team’s rocky start to the game, along with missed opportunities, led to the loss.

“We started slow, the amount of penalties that we took, any amount of time we had to spend on the penalty kill did not help us. When we’re five on five, and we’re actually able to establish court check, I thought we played well,” Penner said. “We had some opportunities. I think we had three or four breakaways today, (they)  just didn’t get rewarded.”

Senior captain Jacob Favour said the team has worked on establishing game plans and staying consistent through offense and defense.

“We’re just looking to get everything sound, get us working together as a team — defense offense and neutral zone — and then once that happens, I think we’ll be successful,” Favour said.

Penner said the quick turnaround in games affected the team’s performance, in addition to having back-to-back games.

“I think having to play in the afternoon, plus playing last night was a quick rebound for them. They didn’t have a whole lot of time to think about anything,” Penner said.

Assistant coach Grant Ameles said although the team was able to compete against Chaska, the team wasn’t able to stay focused, contributing to the 0-7 loss.

“We had two strong periods. It was 0-2 going into the second period, so we had them where we wanted to, but after our second period, it fell apart,” Ameles said.

According to Favour, the team was more concentrated on the ceremony rather than the game, affecting its performance Feb. 5.

“We were more focused on (senior night) at the start of the game, then we just came out in a different way. (There was) more thinking about that than the actual game,” Favour said.

As the team heads into the final stretch of the season, Ameles believes the team is bound for success, given they continue to improve and play to its strengths.

“Going into sections, we have a really strong goalie who can upset and shock some people, so if we all come together and play a good position game, we might come out on top,” Ameles said.

After the defeat, which puts Park at a record of 9-11-1, Penner expressed the need for consistency, stating that it could make or break the team’s success going forward.

Park’s next game is against Chanhassen 7 p.m. Feb. 8 at the Victoria Recreation Center.