Girls’ Ultimate flies to the sky 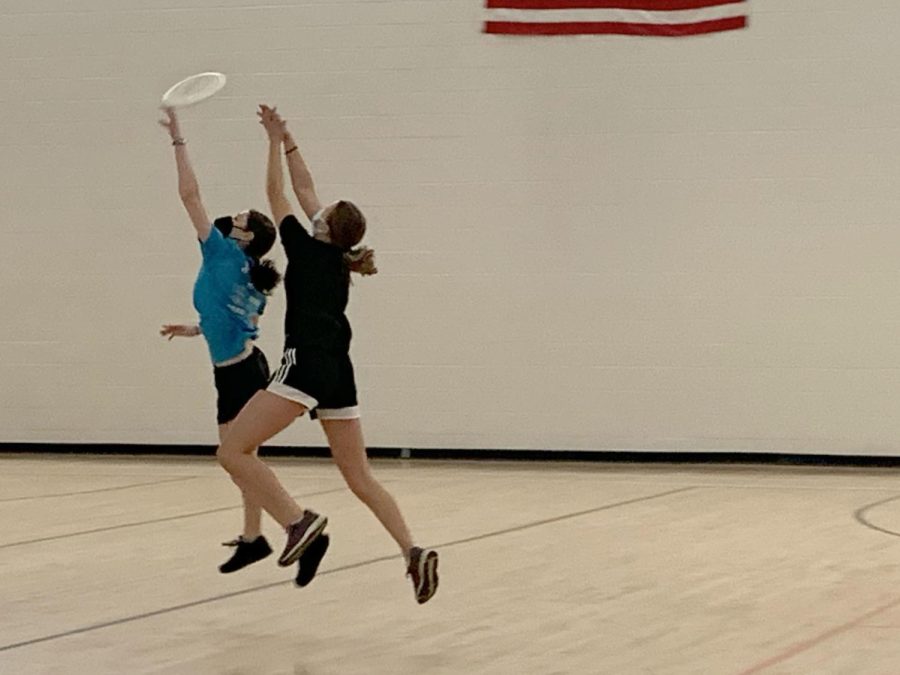 Juniors Isabel Nathan and Greta Runyon compete for who can get the disc Feb. 19. Girls' Ultimates next practice will be held March 2.

As the girls are gearing up headstrong for the incoming ultimate season, senior Natashia Johannes said she feels the extra practice helps to gain interest for the team and for the girls to work on skills, a missed opportunity in previous years.

“I’m really glad that we get to practice during the winter this year. Last year, we weren’t doing any indoor practices, so it was much harder to catch up in the spring,” Johannes said.

Park’s girls’ ultimate frisbee team is using its off-season by practicing in the field house during the winter.  Head coach Ruda said that the extra space to practice helps get new players acquainted faster.

“It gives us a huge advantage over other teams that don’t have a space (to practice), and it gives us new time to get our new players up to speed,” Ruda said.

Even though junior Fiona Long said they prefer practicing outside, she’s grateful for the extra time.

According to Ruda, the upcoming season’s gameplay still needs some readjusting, however, he’s excited to see where the season will lead.

“We have high expectations because last year we won division two. We did lose a lot of seniors, but we gained a lot of new people,” Ruda said. “So we’re not exactly sure where we’re going to end up, but so far I’ve been upbeat about how we’ve been progressing.”

To Long, practicing in the summer is preferred, however , she is still grateful for the use of the gym space.

“I like practicing in the summer (more) just because we get an actual field and cleats, and we get to do longer throws, but I’m glad we have the opportunity to rent a gym,” Long said.

During the year is a great time to practice, according to Johannes, as it is allowing the players more game time and teachable moments.

“Doing winter practices this year is great because we get more time to get people interested before actually playing games, and we have more time to teach people the skills.” Johannes said.

According to Long, the team pays specific focus to throwing and communication in its practices.

“We do a lot of drills practicing cutting stuff, so you know when to throw to a specific person, and, we do a lot of focus throwing where we just practice making sure that we’re in sync,” Long said.

According to Johannes, the team’s focus on the gameplay of others and the fundamentas that can help in the upcoming season.

“One of the biggest things we’re working on is not only focusing on fundamentals but also how the game is played,” Johannes said. “We’ll have times where we sit down and talk about different aspects of ultimate frisbee, which is beneficial for going outside, because we know different fundamentals and how the game is played, and we’ll be at a head start when we get to (go) outdoors after spring break.”

According to Long, she is thrilled with being back and playing again as well as looking forward to having fun.

“I’m just excited to play again. Ultimate is my off-sport, so l like just having fun and playing with my friends. Hopefully, we can have fun and play some good teams,” Long said.

Johannes said she feels the winter practices will give the team a head start into the upcoming season, and is happy with seeing a bunch of new faces on the team.

“I’m really looking forward to the upcoming season. We won D2 state last season, so we’re now in the D1 Girls Division, so I’m super excited about that,” Johannes said. “I think we’re going to do good this year. I know we have a lot of new players, but I’m hoping with winter practices we’ll be able to get a strong start before this season fully starts up.”

Johannes said she feels optimistic about keeping the ultimate community strong with all the new players,

“I hope we can continue encouraging new players and even returning (players) and keep our community strong,” Johannes said.

Girls Ultimate is continually accepting players by the end of April, everyone is encouraged to join. For more information, click this link to the  girls ultimate registration form.