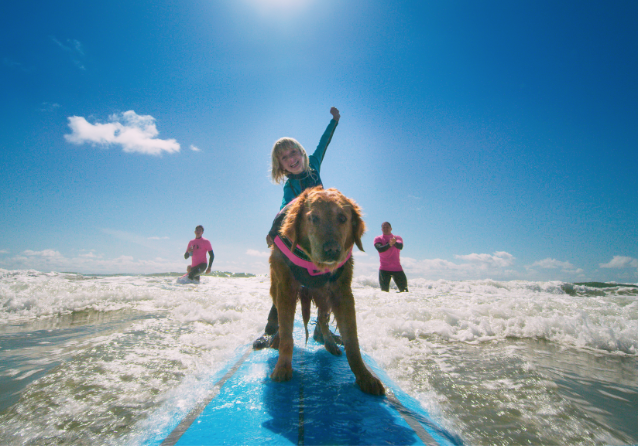 Fair use from Cosmic Pictures

Since the birth of the internet, people have been captivated by animal videos. However, Daniel Ferguson’s “Superpower Dogs” finds a way to combine cool with cute in an exciting 47-minute documentary about dogs with “superpowers.”

Although the movie covers six dogs it centers around one dog named Halo, a Dutch shepherd. The movie first follows Halo as she learns to become a search and rescue dog. As the runt of her litter, Halo is already the underdog, no pun intended. This made the movie more relatable, and seeing Halo learn to save people’s lives after disasters and helping clear them from ruble was inspiring.

The movie then travels to Italy to find Reef, a Newfoundland lifeguard dog undergoing training. As the audience watches, he saves two people to the iconic song “The Ecstacy of Gold,” by Ennio Morricone.

This song, aided by the speakers of the Omnitheater, not only creates a sense of suspense, but it also provides an almost western thriller experience.

Similar to Halo, another search and rescue dog Henry helps save victims from avalanches and is reminiscent of movies like “Point Break.” This thrill-seeking border collie hangs out of a helicopter, flying to save people.

Ricochet, a golden retriever whose role is almost polar opposite to Henry, is a therapy dog for soldiers and special needs children. Ricochet sheds light on much sadder issues that dogs can help alleviate.

This switch in tones between dogs gives a realistic feel to the movie, bringing it back down to earth.

Tipper and Tony, the final two dogs are bloodhounds found in Kenya. Their job is to use their advanced sense of smell to help protect endangered species by finding poachers and thieves.

By using actors such as Evans for the narration, and adding special effects to highlight these dogs’ abilities, this movie felt like a superhero movie. Although merely about dogs, it was a cute and exciting film.