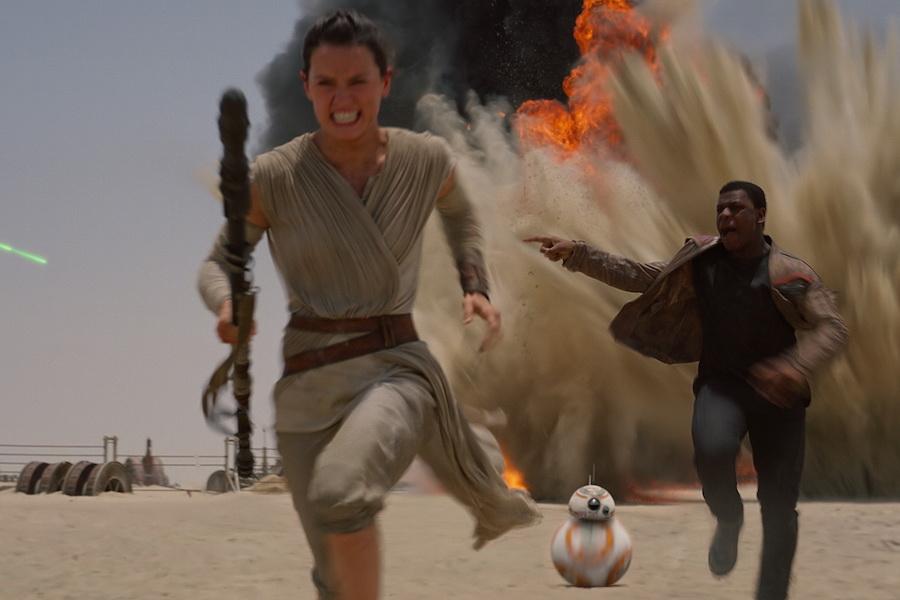 Fair use from http://www.starwars.com/the-force-awakens/
Before Dec. 18, no “Star Wars” film compared to George Lucas’ original trilogy. Fortunately, J.J. Abrams’ “Star Wars: The Force Awakens” lives up to all expectations and lays the foundation for many great films to come.

Abrams directed the film as a major fan of the series. Every scene feels adventurous, crisp and packed with intricate detail. He accounts for every individual character’s introduction, new and old, giving the film the feel of an earlier “Star Wars” episode. However, Abrams’ enthusiasm sometimes gets the best of him, as the film tends to follow the classic “Star Wars” formula. Multiple scenes parallel almost directly with “Star Wars IV: A New Hope,” which has both good and bad implications throughout the film.

“Star Wars: The Force Awakens” contains a lot of raw talent. Bringing new characters into a series, while necessary, always ends up as a gamble. Luckily, the film’s casting covers every possible mishap. The new good guys comprise of Rey (Daisy Ridley), whose family abandoned her on the desert planet Jakku as a child; Finn (John Boyega), a former stormtrooper looking for a larger meaning in life; and Poe Dameron (Oscar Isaac), a dashing young pilot in General Leia Organa’s (Carrie Fisher) resistance army. Kylo Ren (Adam Driver), a young man lured to the dark side, carries the film’s biggest secret. Each actor plays their role wonderfully and their success brings much-needed promise to the “Star Wars” universe. The older actors also play major roles in the film — as Han Solo (Harrison Ford) delivers one of the film’s most memorable performances.

The cinematography in “Star Wars: The Force Awakens,” while simplistic, shouldn’t be overlooked. Cinematographer Dan Mindel shoots many beautiful landscape scenes of distant worlds. Mindel gives the film a more modern feel, showing the evolution of both the “Star Wars” series and cinematography since “Star Wars Episode III: Revenge of the Sith.” The film’s camerawork shines the most during the dogfight scenes. Ships fly in and out of angles beautifully, and the camera’s movement during battles makes for added excitement and suspense.

While “Star Wars: The Force Awakens” sometimes feels exactly like previous “Star Wars” films, Abrams still does a fantastic job. He creates a “Star Wars” film worth seeing multiple times, and one that fans should discuss along with the original trilogy. The film’s new actors deliver fantastic performances, giving the next few films extremely high potential. While new actors shine, equal screen time and usage allow the older characters to do the same. All of this blends into a beautiful, meaningful “Star Wars” movie for the first time in 32 years.