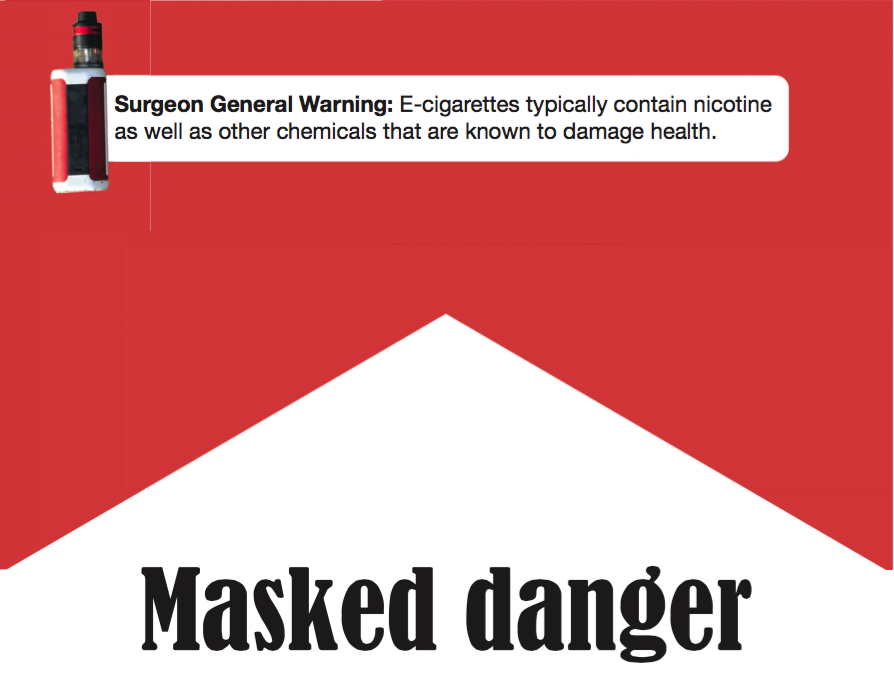 Thinking about the people who vape in his life, junior Flynn Spano said he feels the use of vapes should be determined based on the situation.

“Some people I know vape just for fun. But I know quite a few people who vape because they

are quitting cigarettes,” Spano said. “I think for the people that are quitting, I’ve seen a lot of improvement. It is counterintuitive for people who weren’t smoking before.”

According to Tonka CARES project director Kim Oelhafen, e-cigarettes and vape devices are battery powered devices that deliver an e-liquid aerosol to the user by vaporizing a solution to simulate a traditional cigarette.

According to the Minnesota Youth Tobacco Survey through the Minnesota Department of Health, for the first time since its initial administration in 2000, the statewide survey reported an increase in the use of tobacco products including vapes among teens in 2017.

According to assistant principal Todd Goggleye, there are some concerns of students vaping at the high school.

Goggleye said the administration strives to be proactive and support the safety of students.

“We want to support our kids if they need any extra help or help families find resources to stop vaping,” Goggleye said. “There’s so many chemicals in the nicotine cartridge, and I don’t think people know it’s dangerous. I also don’t think students know the nicotine is a lot stronger than a normal cigarette.”

According to St. Louis Park Family Services Collaborative Coordinator Debbie Wells, the Collaborative’s board chose to address vaping in its annual forum Oct. 23 because of its relevance to youth in the community.

“I think it is a good topic and it should be something that students and parents are inter- ested in,” Wells said. “I hope they take away vaping is on the rise, especially among youth and high schoolers, and it’s not a positive alternative to cigarettes.”

Wells said the issue is so recent that many have not yet determined how to address the issue.

“I think it’s kind of a choose-your-own-adventure situation right now where we really don’t know very much about it,” Wells said. “I think even at the high school they haven’t really defined how to deal with vaping at school.”

As a result of the maturation process, the adolescent brain is more sensitive and vulnerable to the rewarding effects of nicotine, including delirious effects on the development of the prefrontal cortex, according to Olehafen.

According to Goggleye, while there is speculation of students vaping during school hours, the administration has not taken any new measures to prevent this.

“We’re not gonna do anything different.We’ll just be aware. We monitor the hallways, the bath- rooms with the GLCs. Though they’re there for academic support, they’re there for behavior as well,” Goggleye said. “There have been students who have reported that students are vaping at specific times so yeah, we’ll look into those times and take them seriously.”

According to Wells, St. Louis Park is not the only community discussing and informing others on this prominent issue.

“Minnetonka had put on a vaping forum, a community forum in April. I heard very good things about it from members of our board who had attended,” Wells said. “I heard from a parent who had attended that it was just really timely and high interest and well presented.”

“We just wanted to make sure that since they were sent to us, we’d put the signs up and inform the students about vaping and possible after effects of vaping,” Goggleye said.

Spano said he believes education on the impacts of vaping is important.

“I do think (teens that vape) are aware of the effect that vaping has on them, but I’m not sure how much they really care, which is a little concerning,” Spano said.