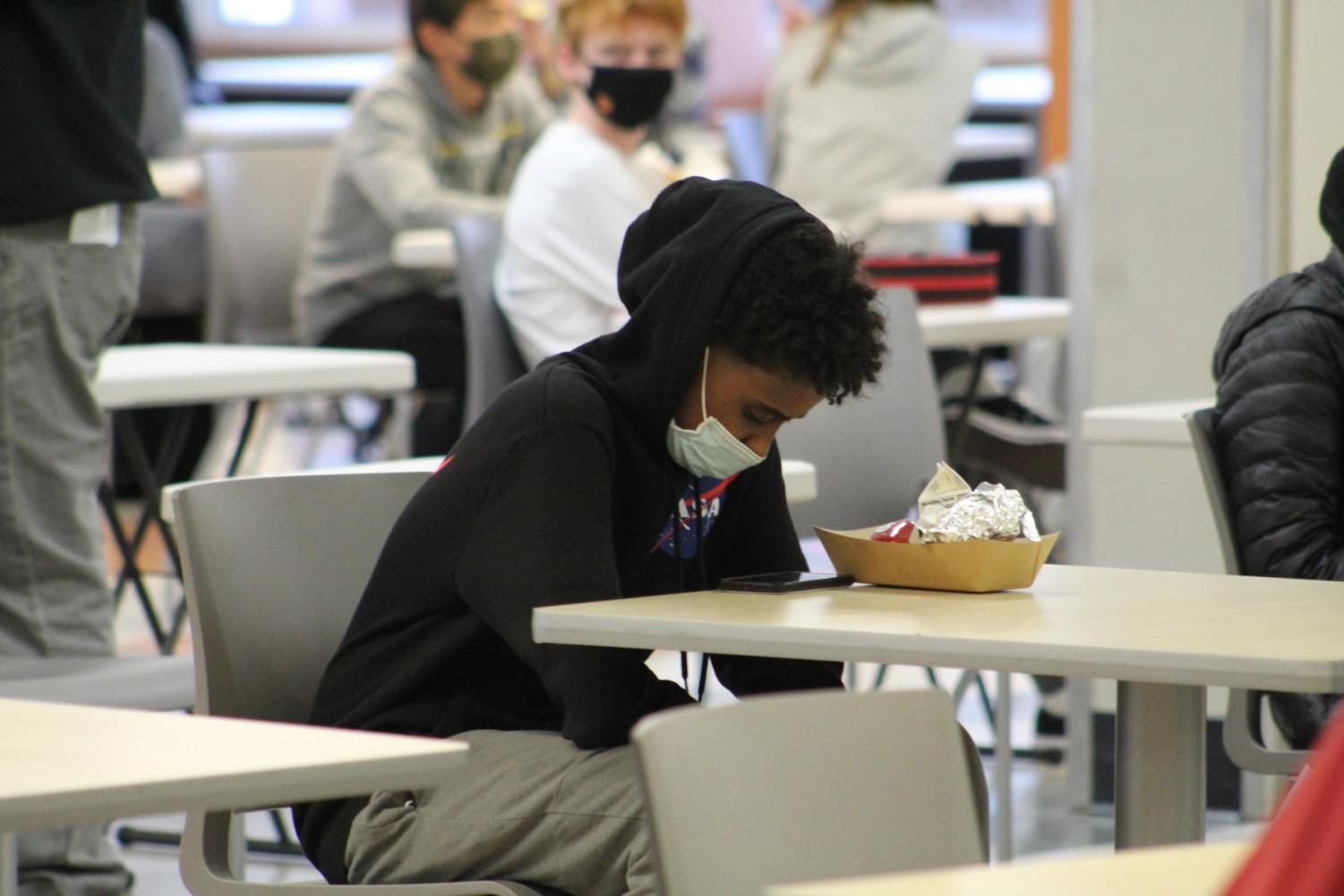 Students eat their lunches at socially distant tables Oct. 26. Due to the budget overage, many nutrition staff providing these lunches will be voluntarily furloughed. (Ryan Barnett)

Students eat their lunches at socially distant tables Oct. 26. Due to the budget overage, many nutrition staff providing these lunches will be voluntarily furloughed.

“Technically we’re over budget, but it wasn’t like we spent more than we had. It was a situation in which we based our budget off our projected enrollment and our actual enrollment came out under projection,” Osei said. “We are about 160 students under what we projected, which is contributing to this million-dollar deficit.”

District Director of Business Services Patricia Magnuson said the district made the choice to tap into reserves instead of using federal funding last year.

“By the end of (last school) year, we had a decision to make. There was some federal funding available, we could either accept it into last fiscal year or hold on to it and use it for this year’s budget,” Magnuson said. “We had sufficient reserves, we made a decision to just use the reserves for last year and save the federal funding for the current year.”

Osei said that the district is currently using the Cohort Survival Model, which helps calculate

the projected enrollment. Osei also said that the district is altering their business plans and advertising for families to choose St. Louis Park Public Schools..

“Something else that we are doing is that we are being very intentional about our marketing strategies,” Osei said. “Here in St. Louis Park, in the West Metro, we’re in a very competitive environment. If you think about it, in a 10–12 mile radius there’s all sorts of different school districts, not only public schools but non-public and private options as well.”

Osei said the district is focusing its attention to increasing enrollment and that Kindergarten enrollment meetings have been taking place to promote St. Louis Park Public Schools.

“This is the time of year that we start our Kindergarten enrollment meetings, where we’ll be engaging families and telling them about our schools and really trying to encourage them to select us,” Osei said.

According to junior Will Dooley, due to the unpredictableness and alarming effect of the pandemic, he is more understanding of the error.

“In any other circumstances, I would probably be a little bit upset with the school because their budget goes directly to my education,” Dooley said. “ If they get something wrong, that’s going to trickle down to my level.”

Osei said the district receives aid from the Federal Government that is only for a certain purpose and can’t be used to combat the budget.

“The actual amount wouldn’t be enough to balance out the deficit. But the other piece is that those dollars are earmarked for specific COVID(-19)-related expenses. It’s not that the amount isn’t enough, it’s that we couldn’t even use those resources for our general budget as a whole,” Osei said.

Although budget cuts need to happen, senior Danny Walsh said the effects may be felt citywide as the schools are such an integral part of the community.

Magnuson said she hopes students won’t feel a disparity in their education and said maintaining that low impact will be a goal for administration.

“Kids probably won’t notice it, unless you go into the office and need help and that support person isn’t there. We aren’t cutting classroom teachers,” Magnuson said. “We hope that kids will not notice it, whether we can sustain that level of not impacting kids — that I can’t promise.”

Interim Principal Wendy Loberg said as soon as she heard about the district’s $1 million budget overage, she knew she had to take serious measures to prevent the situation from worsening.

“I said to all the department leaders, ‘From here on out, I’m going to put a freeze on budget spending, (that) doesn’t mean you can’t buy what’s necessary, but I want to talk with you before you make the expenditure,’” Loberg said.

According to Superintendent Astein Osei, Loberg’s role as principal is crucial in solving the problem at hand, as well as making sure that the situation does not worsen.

“We’re having principals or ‘budget managers’ work with building leaders at school and say ‘what are some things we know we’re not going to do that we can cut out of the budget’ so we can allocate those funds back to the general fund which helps us close that million dollar gap,” Osei said.

The budget overage, caused by an overestimation of district-wide enrollment, was concerning news to junior Olivia Brown. According to Brown, she’s afraid budget cuts could affect programs that she is involved in.

“Coming from someone who is in the arts, it makes me a little bit nervous to know that we already don’t have a large budget and we went over by so much and that could cut down on what we asked even more,” Brown said.

Junior Will Dooley, who is a percussionist in Park’s band, is concerned the budget overage will affect the band, which is already over budget to begin with.

“Our band budget was quite a lot over this year, and part of the effect that had on me was we actually needed to use some of the money we’ve got from fundraising in order to make up for some of that deficit,” Dooley said. “Usually that money will go directly towards taking kids on trips and so some kids in band might not be able to go on a trip in their four years at the high school, which is really sad.”

According to Loberg, students shouldn’t be too concerned about budget cuts, as a lot of the over-spending was counterbalanced by funds that weren’t needed this year.

“Some of those [budget cuts] just happen naturally, because of the pandemic. Look at athletics…  they’re not paying for buses and officials and all that stuff. So we’re saving all of that, thankfully,” Loberg said. “But in the end, you students aren’t getting any cruises either, which is so frustrating for every one of us that cares about kids.”

Osei said he doesn’t know what will be affected by the over-budgeting in specific, as some state-level funds are yet to be determined.

“It’s too early to say, so I don’t want to speculate on what may happen next school year,” Osei said. “There’s still some things that we’re waiting on from a state funding standpoint to get clear about before we can have a clearer direction on what that will mean for us locally at St. Louis Park schools.”

Loberg said while she is uncertain about the coming years, it is still a number one priority of her’s to be cautious about spending during the next couple of months.

“There’s reason for concern, because of what we don’t know. If the state would forgive all of us, we’d be so blessed, right? Does the state have the resources to do that? I don’t know,” Loberg said. “I would say it’s very important that we’re very cautious about spending right now, and continue to realize that we have potential for making significant cuts.” 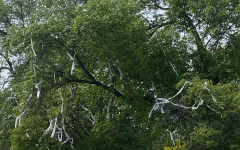 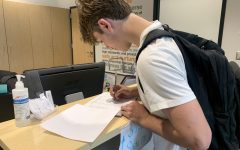 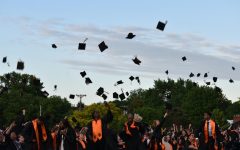 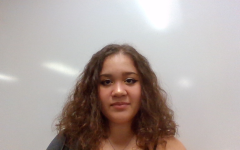 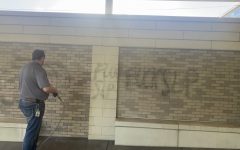 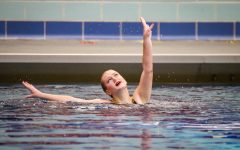 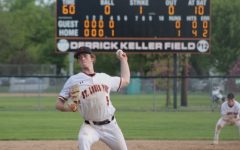 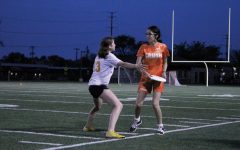 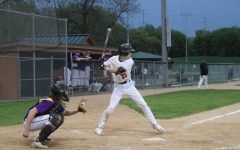